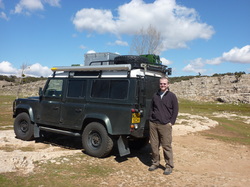 I knew nothing about cars or round the world travel until very recently. In fact the closest I've come to a Land Rover was I once had one rented for me at work. I drove it for two days and that was it. In retrospect it was probably they same type as I have acquired myself although I doubt that one had done 200,000 miles. So i got us a Land Rover 110 Defender County Station Wagon 300Tdi. Manufactured in 1994 it was one of the first 300Tdi Defenders and now has over 200,000 miles on the clock. When I got it was under 200,00 miles and I'm unsure about the engine, I think it is about 50,000 miles young. Below you can see a picture of it in a previous life and below that you can see what it became after who knows how many £1000's had been spent on it. The previous owner had replaced the Engine and Rear Cross Member and had it resprayed to Ardennes Green. He'd done a fair bit of work on it but didn't seem to have filled the transfer box with oil.......my first mistake.
20/07/2011

Should have changed the half shafts and drive flanges......changed in Johannesburg. Easier in the UK before you leave. When worn they clunk quite a bit.......(14/06/12) Current thoughts take some spare flanges....(07/13)

We've just had the transfer box out yet again and had the Intermediate shaft sleeved with a steel insert. We did this in Cape Town at Roverland. Its faster and cheaper to do it here. It was only 650 rand but I stripped the box and took it in empty of oil and ready to be machined (22/1/12) Its still leaking (07/13)

After a year of sleeping in the car someone asked us what we thought and what had happened. Here's a bit of a synopsis. We are very happy in the car and our full size double. Its actually better to sleep in than a normal double. You don't fall out if you get to the edge so it feels bigger. I also have probably 5cm (more maybe) of additional width but I'm not sure what the window to window width inside the back of the 110 is.

On the humid nights the boat fan is a must as it keeps the air moving. We can have the sides open as we have stainless nets on them and also on the rear door winding windows. We've fitted a hanging mosquito net so we can actually have everything open. We've just purchased another boat fan (they aren't cheap !) but we're having fun trying to decide where to put it. It’s a Hella Turbo and the old one is a Jet. The jet draws 300mA and the Turbo 600mA on full speed. It doesn't make a dent in the 50Ah leisure battery. The constant noise also help drown out all other outside noise so It makes the noisiest places OK to sleep. With the fan on It worries me a bit as we cannot hear outside but if we are locked up its unlikely something could happen that wouldn't wake me up even with the fan.

The Alpine windows are our side security as we can sit up in bed and see almost 180degrees at each side. Julie looks out the back window and I can jump into the front. Not that we've ever had to. If we had to do the window tints again we'd get blackout on the sliders and rear winding windows, the alpines in 5% (as they are now) and the rear with blackout at the bottom and a strip on 5% at the top. We've also got blackout curtains on all the windows and these are surprisingly good for insulation and condensation protection. The sleeping bags don't touch the windows and the curtains go all the way round the bed so it stops any dampness on the bags.  We've actually bought the new fan as if the Jet breaks were are in real trouble. You couldn't sleep in the car if its hot without one. The floor gets hot and when its 40c you need to park early otherwise the car is at 60c. The floor gets to 65c on a bad day and 50c normally. If its cool the floor gets to 30c so it helps keep it warm in the car but we have the diesel heater (Webasto Airtop 2000).

We like being in the car more than a bed in a hotel. We can camp almost anywhere and it just looks like a parked car. We camped in the VA Waterfront Mall in Cape Town and along the Nile in Aswan and had no problems. You just need to choose the spot. Too quiet and we might have issues so if there’s a few parked cars around we just park up. We do stand out obviously but most of the attention is on the many flags on the back door.

Mechanically the car is good. Testament to changing almost everything before we left. Things that weren't changed have failed. We'd not had a single failure that stopped us and in fact we've not had a single failure other than the clutch slave seal that meant I had to fix it right then. Although the shocks were changed we could have still driven. Almost everything is maintenance based on normal visual checks.

We've had a clutch slave seal go in Kenya. I got a mouthful of Dot4 from the housing.

We keep breaking rear shocks. Top ring usually. We now have some BOGE 130 rears in the spares box as the Bilstien rubbish is leaking on one side but the Armstrong on the other is going strong . I put this down to being heavy and a weak anti roll bar although we are not sure.

Stuck piston on front caliper but just needed cleaning. >400c on the wheel !!!! (stripped entire hub and re-greased on side of road)

Wheel bearings keep coming loose but they get checked and sorted all the time. One is worse than the others so i might change the stub axle.

Transfer box is a pain in the ass leaking so I had it sleeved in Cape Town.

The centre diff lost its thrust washers. We've had the transbox out 3 times. I wonder if some very poor EP oil in Sudan affected the washers.

Changed the airbags in the rear for 130 helpers in Tanzania as the airbag mount was broken, as they all do.

Changed the rear anti roll bar UJs. First we made new bushes using my dremel and some shock absorber bushes

Changed rear drive members and shafts . They were worn and not changed before we left.

Changed a rear prop UJ twice as its not greasing properly so was wearing. It’s still not right and it’s a Hardy. The allmakes ones seem better as they have a metal seal on the cup. The Hardy's have a rubber one and it doesn't seem to keep the grease in.

Wore some holes in the snorkle pipe, sealed with aluminium air-conditioning tape.

Changed the headlights to the other side ones and stuck with them even in Africa.

Change the oil every 5000 miles / filters every other change but often every change.

Change the Transbox oil every 7000 miles  but now increased this to standard as its not really dusty anymore.

Change the axle oils every 10,000 miles  and again back to standard.

Check and grease about every week (or two)

If I had to say (repeat what I was told) what made the difference is everything on the car is standard kit.  It’s the best advice to other travelers I can offer. The other would be to take a Land Cruiser if you don't want to carry spares as there’s 3 dealers in every village !

The only thing that wasn't standard was the crappy Big Bore shocks and these were a real problem. We ended up putting dropped shock mounts on the rear and normal length shocks. The shocks run smack in the middle of travel now but they are still breaking. A few have said we should go back to normal mounts and normal shocks but even carrying 2950kg we seem to be running with a lift. We will never fathom this problem. Maybe the BOGE HD 130 shocks will last the rest of the trip.

Tyres are BFG AT and are flawless. The older MTs split but the newer ones do not by all accounts. East Coast ATs. West Coast MTs are a must.

Set off in October and miss the rains all the way down the East Coast. 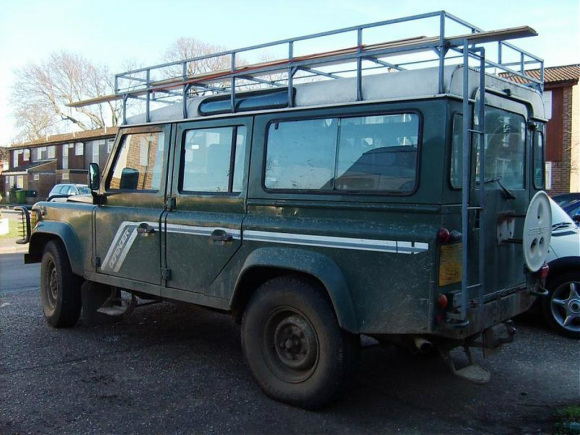 The Car before we bought it. Not sure how long ago this was. 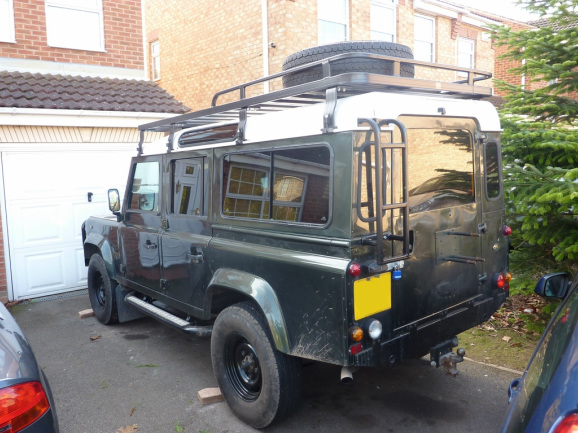 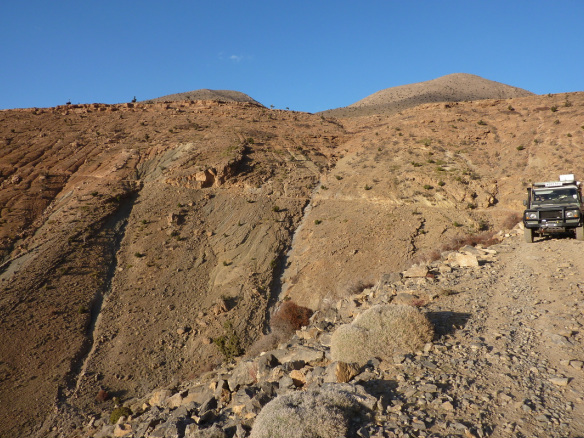 This is Morocco and not a route i'd recomend in a top heavy Defender 110. 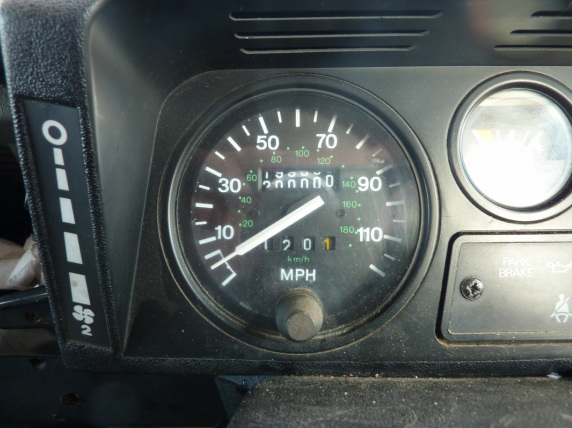 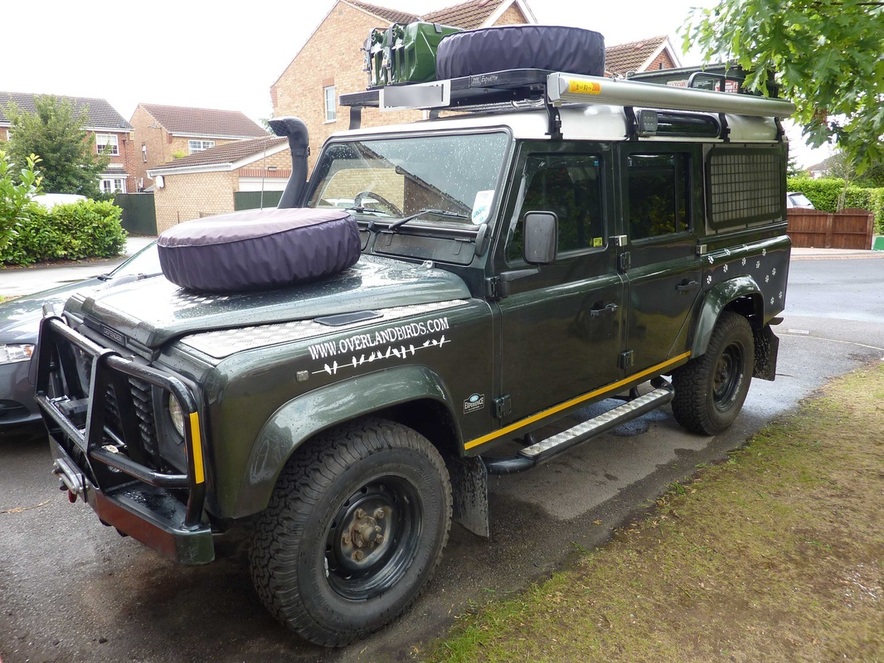 How she looks today having been named Matilda by J.